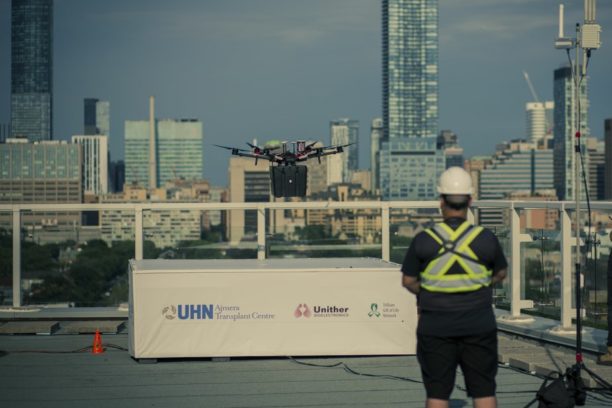 The use of drones for organ transport could revolutionize the field and save lives.  Bromont Unither transports lungs in Toronto, Canada, to demonstrate how it works.

Last month, Bromont Unither Bioelectronics, a United Therapeutics subsidiary, succeeded in transporting lungs via drone between two Toronto hospitals, “a springboard” that could revolutionize the field of transplants, according to Unither’s vice-president Mikaël Cardinal.

The drone travelled over a distance of 1.5 km, delivering its 6 kg payload from Toronto Western Hospital to Toronto General Hospital, where a patient successfully received his transplant at the end of September.

“This is truly a remarkable achievement in terms of complexity, in controlled airspace and flight over high population density,” said Cardinal, who coordinated the design, development and flight of the drone.

Though fully automated, the drone…