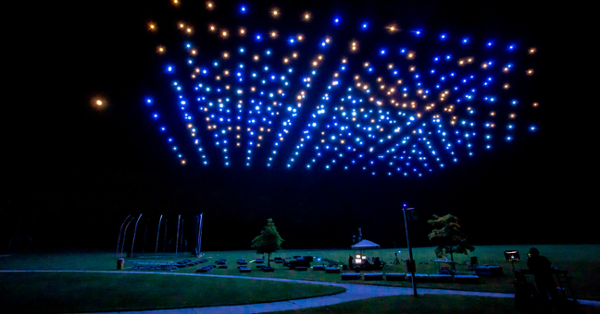 On a recent midnight, hundreds of drones lifted above Rowan University’s West Campus in tightly synchronized formation, their LED bellies glowing as they formed color-changing patterns in the sky. Scattered on the athletic fields below the buzzing quadcopters, a handful of spectators cheered.

It was the largest demonstration yet of the proprietary swarm technology developed by Philadelphia-based Verge Aero, a startup company flying complex aerial light shows for audiences around the world. (Watch video here.)

Except this time, they were back on their home turf.

Since launching their business in 2016, three Rowan University engineering alumni—Tony Samaritano ‘12, ‘18, Chris Franzwa ‘13 and Anthony Merlino ‘14—have been using the University’s West Campus as a testing ground for their drone light shows.

“They’re like high-tech fireworks,” Samaritano said. “We can dynamically build shapes in the sky and spell out logos—and we…