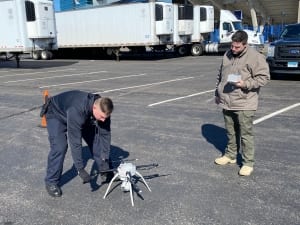 The teams ran scenarios at Hartford-Brainard Airport where they tested the state police department’s ability to locate a rogue drone as well as its operator by using law enforcement operated drones to find them.

“If you want to fully neutralize the threat from a drone, you need to locate the pilot as well as the device itself,” said Steve Blindbury, TSA’s Connecticut Assistant Federal Security Director for Law Enforcement.

The test showed the team’s ability to quickly find the drone and then guide police forces stationed on the ground to locate and order the operator to land the device.