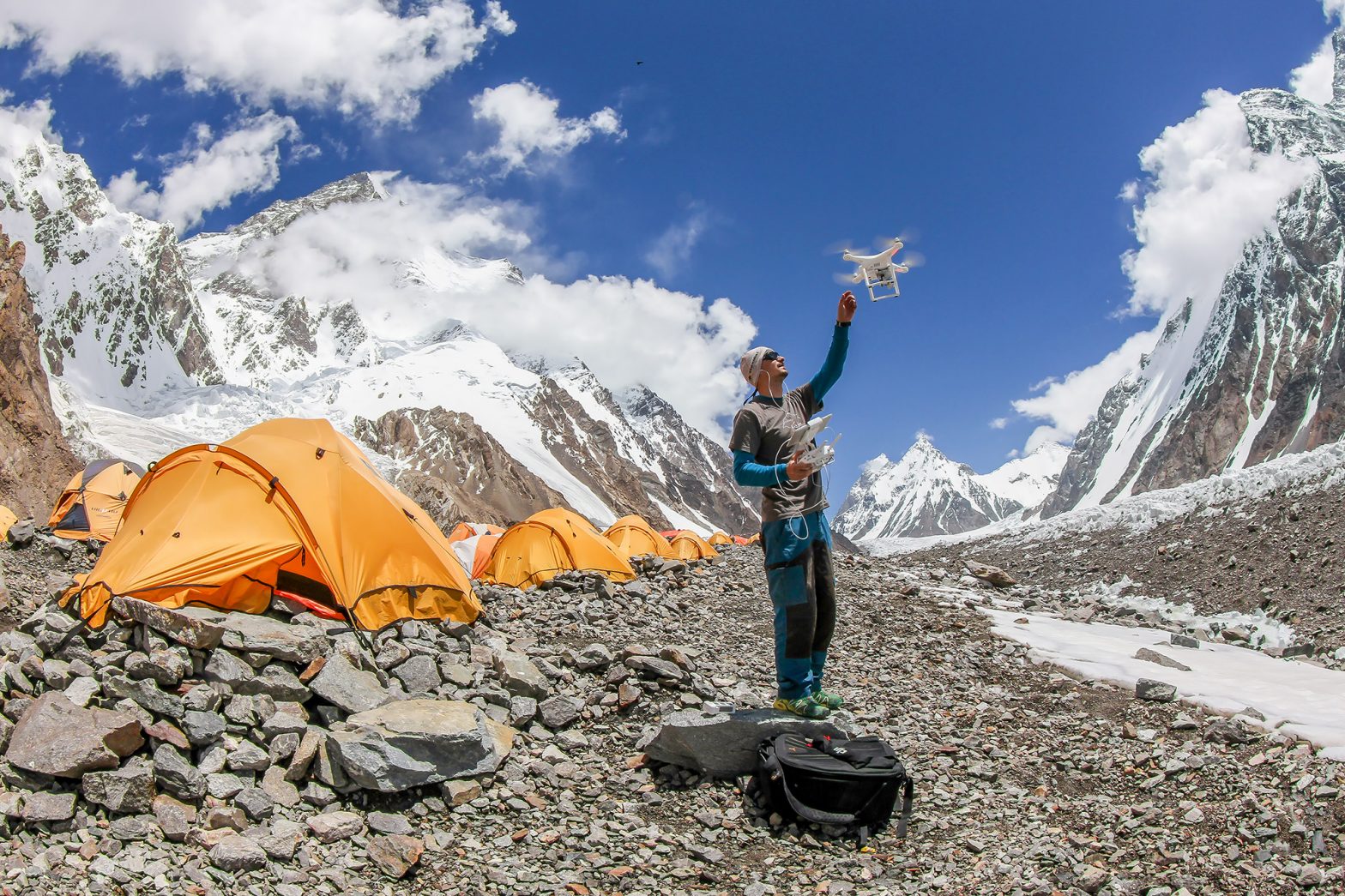 Drone adventure! Our Czech dronist & LoweProfessional Petr Jan Juračka, went for a challenging K2 expedition with the team and of course with his drones (two DJI Phantom 3 Advanced). It’s a big drone adventure, isn’t it?
He has already experienced Austrian Alps, Czech national parks, South Africa and windy deserts of Mongolia. We wanted to know more about this drone adventure. You don’t fly drones everyday at K2 at altitude 6100 meters a.s.l.!
Take a look at this fascinating expedition!

“So, we were in the Karakoram, Pakistan! After two days in the airplanes, one day at the hotel and one day in the jeep we were looking forward to six days long trek to the base camp! Together with the Sherpa, hundreds of porters, donkeys and some other climbers we were definitely on the go!”

“We gained a lot of knowledge about flying in the winter that time, and I get some feel it might be able to fly at the base camp, as well as over the glaciers. However, after a serious googling I found the K2 base camp to be a Bermuda Triangle for the drones. In 2013, Polish David Kozlikowski was probably the first man with the drone here. He wrote me that the drone flew. However, he has not get a good footage because of the mechanical problems with the gimbal. In 2014, another drone was carried here, but crashed immediately. And mine? I smashed it just few meters before reaching the base camp! However, I had a second one, as my friend advised me, so adventure could go on!”

“Rather than of the altitude, I was afraid of the cold. The drones are powered with the LiPo batteries, which are sensitive to the temperature. I am keeping both my drones at the old firmware, which allows starting with frozen battery, but still, before every start I warm up the battery with my body in the sleeping bag. We made also one testing trek across the Czech highest hills, the Giant Mountains, when it was really freezing. The lowest temperature at which I was flying a drone was about minus18.5 Celsius under zero.”

“I knew I will carry my drone in the LowePro DroneGuard BP450, as I was satisfied with it in the Africa this year already. We went for filming at the coasts of South Africa, and the highest peak of the Lesotho, Thabana Ntlenyana (3,482 m). We invented also some additional warming system for the bag. I found this to be not suitable for the expedition, because of substantial battery consumption. Therefore I finally decided to warm up the batteries by my body.”

Petr proudly walking just under the second highest peak of the World, K2 (8,611 m), with his drone in the backpack!

“When we arrived to the Camp I, I waited few hours for better flying conditions. As the wind stopped, I decided to risk a bit and took off my drone so high! Well, it had no power reserves, but I flew  for three minutes! I almost could not sleep from that,” Petr adds.

“When you are so remote, the first thing you can notice is the night sky with absolutely no light pollution. The adorable scenery, to what were people used centuries ago!” This is the Broad Peak (8,051 m) shot by Petr directly from the K2 base camp. Petr used a special camera for night shooting. Thanks to Nikon D810A, together with Nikon 20/1.8 lens he gained the Milky Way and all the stars around.

Czech climber Klára Kolouchová on the glacier during her descent from the Advanced Base Camp (5,200 m) to the Base Camp (5,001 m). When the weather is like this, it is possible to fully enjoy the beauty of the glaciers. “Climbing up with great Klára was definitely a life-long experience! I have never been so high, and was amazed by the views changing every minute!”

However, for the moment we don’t have any aerial captures from this drone adventure. Why? Because Petr used the drones exclusively for recording aerial footage for his movie. He is going to produce it when being back home from the expedition. He keeps the secret and we are really looking forward to see it! Stay tuned! if you want to know more about Petr check out his website.

Thanks Petr and congratulation on climbing the K2!