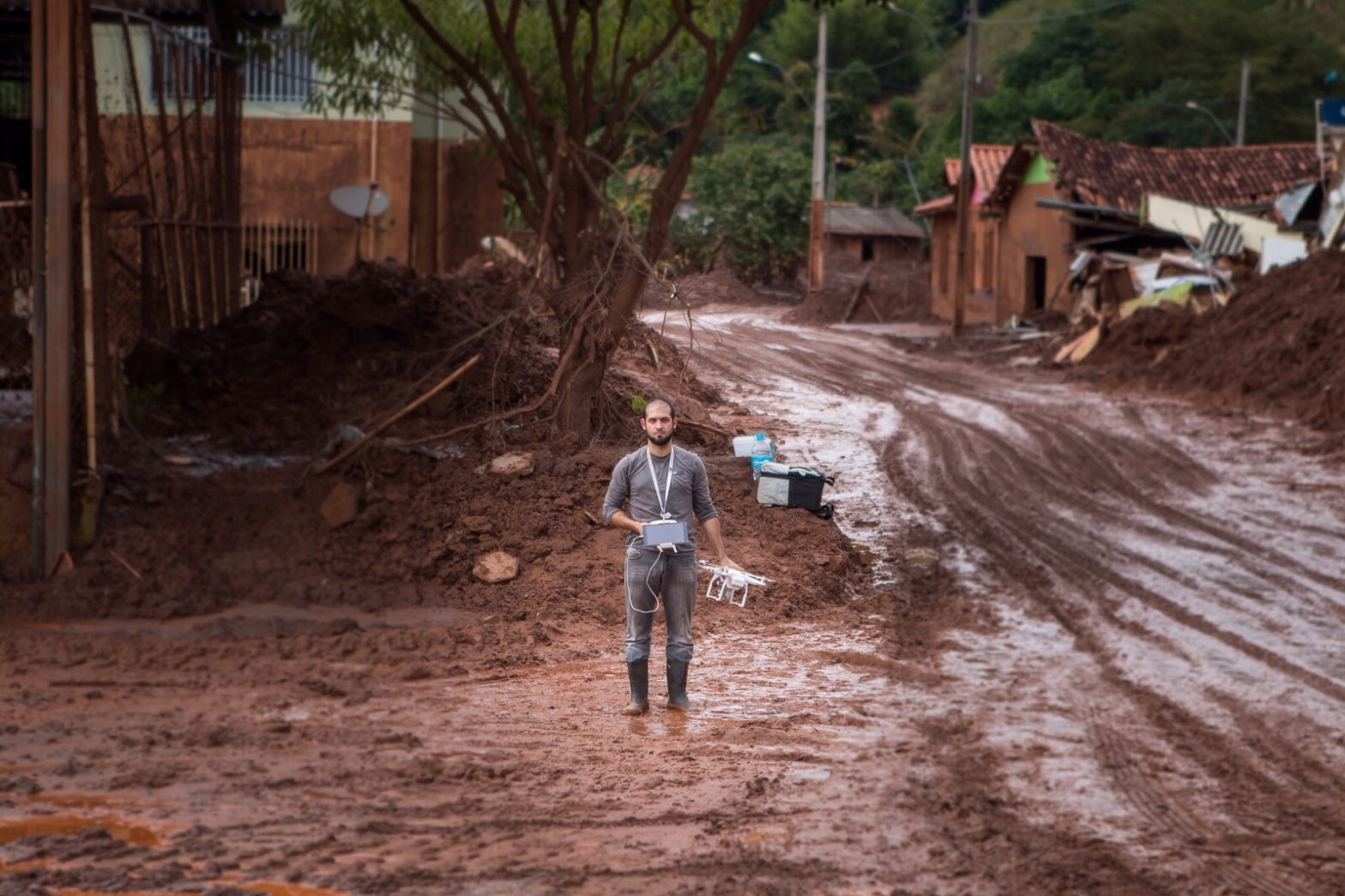 Alexandre Salem was borned in Rio de Janeiro – Brazil, 31 years ago.  Before becoming an aerial photographer, he was working as an operations analyst in an investment bank. Huge change, right?

Alexandre is also one of the winners of the “small drones big changes” contest with its amazing photo of the city of Paracatu vanished by a river of mud during the biggest environmental accident in Brazil’s history.

When did your passion for the drones begin ?
I wasn’t much into photography before buying my first drone. I can say I’m a technology enthusiast and also a big fan of arts in its different forms of expression. It was on the very beginning of 2014 when I first saw incredible photos taken by those flying cameras. Hence, buying a drone was a very natural decision for me.

What kind of drone do you have for the moment?
I’m all about compact quadcopters. Nowadays, I use the DJI Phantom 3 Professional. Weight and photo quality are what I value the most when choosing a drone. For me it’s very important to have a drone that you can easily carry everywhere you go. And that you are able to operate all by yourself (instead of one for the drone and other for the camera).

Which drone innovation-related topics are of greatest interest to you?
Improvements on camera control is absolutely what I enjoy the most. Every different configuration of the photography that I can control (such as Exposure, ISO, Focus, etc…) help me achieve better results.  I mean, of course I also love POI, Waypoints, Follow-me, as well. But I have to say that I almost never use those flying features.

What are your favorite flight areas?
I love mountain hiking with my backpack carrying the drone. Drone’s capability of discovering new angles is especially impressive in the nature.

What image do the people from Brazil have of drones?
I risk to say that in majority, drone are still seen as ‘amazing toys’. Specially when you travel to smaller cities. Once, I was piloting in a square of a city called Petrópolis, and suddenly I’ve found myself surrounded by dozens of curious people, trying to see the FPV screen. Of course now, tons of people are buying drones, and safety issues will need to be addressed.

What are the rules to follow in your country and what do you think?
Even without rules, there are some ‘best practices’ that brazilians follow in general. Like: flying under 300 ft, don’t fly over crowds, stay away from airport areas, etc… When you run lawless (as Brazil kind of is today), people may argue that the flight isn’t allowed in certain place, and keep you from raising your equipment from the ground. So I believe that a legislation it’s strongly needed.

That’s why, in the beginning of 2015, photographers and drone operators created ABM (Brazilian Association of Multirotors) to centralize discussions with government parts, and help them create a legislation that works for everybody.
Right now, there’s a work in progress to create the brazilian legislation over UAVs in general. The draft seems pretty good to us, photographers. Let’s see how that ends.

In your opinion, what are the top three skills you need to be a good pilot?
A good pilot needs to:
– Stay focused the entire flight and beware of your surroundings;
– Don’t try anything stupid
– Be prepared for ’emergency’ moves (like fast comeback when rain drops, signal lost, birds chasing, kites attack)

What movie or photo are you the most proud of?
In 2015, I was invited by the World Surf League, to do aerial photography during the event in Rio de Janeiro. The photo of Filipe Toledo on the jet sky, minutes after winning the event, it’s my favorite! Flying close to the water, allow us to see how amaze Filipe was about the crowd reaction!

Drone photography is all about reaching innovative angles! It’s amazing when you capture something that you know it couldn’t possibly be done with any previous technology.

What areas of the world would you like to explore with your drone in the future?
I’m finishing the production of my first book with drone photographies of Rio de Janeiro. It was such an incredible experience to rediscover places that I only knew from the ground!
Next year, I have plans to produce a 2nd book, focused on natural beauty of other parts of the country. I feel like I still have much to explore in Brazil before traveling the world with my drone in the backpack.

Can you explain what happened in Brazil (environmental catastrophe) and in what circumstances you were able to fly?

The state of Minas Gerais is an important mining region of Brazil, since portuguese colonization. Several companies explore the mountains within the state. One of them is Samarco.
In November 5th, one of the dam where the company kept the production waste exploded, leading the mining mud to several small cities and rivers. Two cities were almost completely destroyed (Bento Rodrigues and Paracatu) and the Rio Doce river (850 km long) was entirely polluted!

Flying over the destroyed cities is, obviously, visually very impressive. But we only understood the scale of the accident, when we began traveling across the entire course of the river and see people suffering from water shortage. That kind of feeling cannot be reproduced with drone photography.

In the first minutes of the flight, we realized that the city was far away, and that the drone couldn’t possibly reach the area.
At that point, the police officers were already so impressed by the drone and the FPV screen, that somehow they got moved by the situation, and let us pass the barrier to a nearest point!

Thank you VERY MUCH Alexandre
The End.